You are here: Home » News » DEVI-PUJA The First Charita 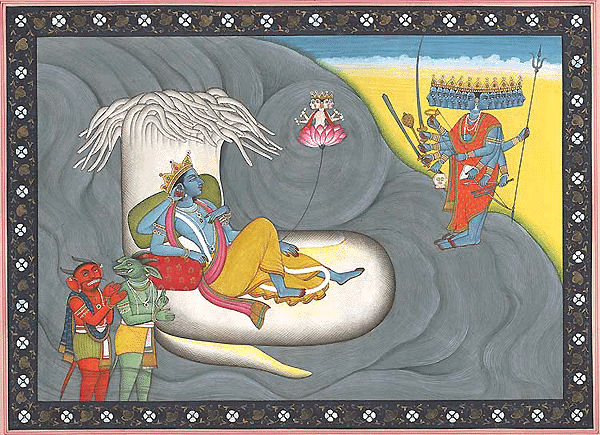 Near the hermitage of the sage Medhas in a forest, two persons of ill-luck met, one of whom was a Kshatrya, Suratha by name, and the other Samadhi, a Vaishya. Suratha had lately lost his kingdom as a result of its invasion by another king whose victory was achieved by intrigue of Suratha’s ministers and disloyalty of his subjects. The Vaishya had his own tale of woe, for he had been a wealthy merchant and was later abandoned, driven out of the home by the members of his own family – by his wife and sons and relatives from their greed of power, wealth and influence. After an exchange of knowledge of their pitiable plight, both of them decided to approach the sage who was living nearby and place before him their difficulties in which there was a common element. After paying their respects to the hermit, they narrated the story of their misfortune and then put this question to the sage.

The king spoke : “Great sage ! Though I have lost my kingdom and have nothing now to do with it, my heart still clings to the sense and feeling of ‘mine’, mamatva, in regard to my former associates, in the ministry and military, officers and subjects. Why should this ego-feelings of ‘mine’ still persist while there is no justification or truth for its basis ? And here is the merchant ( pointing to Samadhi ) who is no longer required by his relatives who have abandoned him; still he sails in the same boat as I, with his heart clinging to his wife and daughters, sons and relatives and past associations. What is the mystery ? What is the cause of this incorrigible delusion, moha, to which we are victims ? We are not fools unaware of what is wrong and evil; still knowingly we are drawn by a compelling force to this enchantment of mamatva, ‘mine’. Is there a cause ? Is there a remedy ? Deign to come to our rescue, O sage.” 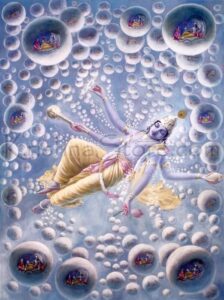 Medhas, the sage replied, expounding the root cause of all suffering and pointing out the remedy :

“All creatures have a consciousness of their own and are instinct with the desire to preserve themselves and their knowledge is spread over the objects of senses. Of the created beings, some are day-blind, some night-blind, while others are, day and night, of equal vision. The knowledge of man is in no way better than that of birds and beasts which show great skill in preserving themselves and  what is theirs. Here again, the sense and feeling of ‘mine’ is spread over all creation – man and beast alike. Know then, the cause of all this is ignorance, avidya, which is not the creation of any being on earth or in heaven. It is a product of the workings of mahamaya, the great illusory Power of Lord Vishnu. She is the power for bondage as well as for liberation, for ignorance and for knowledge. By Her the whole universe is set in motion revolving incessantly and containing in it all that is mobile and immobile. She, in short, is the Power of Hari, the Lord of the Universe, called

yoga-nidra, the Sleep-Power of Yoga or the super-conscious poise of the Supreme Being.”

Requested by Suratha to speak more about Her, the sage proceeded :

“Though She is eternal, immanent in the whole universe which is Her embodiment, She takes birth again and again, incarnates Herself in a special form of Her choice for the successful regime of the Gods, Devas – for establishing Divine Principles in the world-order so that its functionings may increasingly harmonise with the eternal verities and higher laws of the creative Godhead.”

At the close of a former cycle when the cosmos was asleep in the Oceanic Being of its own Cause, and Vishnu, the Lord, also was in his supra-cosmic sleep, yoga-nidra, two Asuras, Madhu and Kaitabha were born of the ear-dirt of the Lord and tried to kill Brahma, the creator residing in the navel-lotus of Hari. Upon this, Brahma sought the grace of the goddess of Sleep lodged in the Lord’s eyes and sang the praises of the Devi. In response, Mahakali, the terrible ruler of the Night, the pitch Dark, tamasi ratri, granted Brahma’s prayer in rousing Vishnu from the sleep and caused the destruction of the two Asuras : this is how She came to be titled Madhu-Kaitabha-Nasini.

Thus ends the first Charita, the story of Mahakali who is the Goddess presiding over the Divine tamas.