DEVI-PUJA The Third Charita and Conclusion of the Devi-Mahatmya

You are here: Home » News » DEVI-PUJA The Third Charita and Conclusion of the Devi-Mahatmya

There comes the last or uttama charita, the best story, of the Mother.

Two brothers, Shumbha and Nishumbha, sons of Sunda and Upasunda, the well-known Asuras of the house of the demon Hiranyakashipu, were engaged in severe austerities from their very boyhood and by the sheer force of their tapas, succeeded in getting audience of Brahma, who granted them all their desires in addition to the boom ( at their own request ) that they would not meet death at the hands of gods or men except at the instance of a kanya, a virgin, who was not born of a mother’s womb, ayonija. Then puffed up with pride and power, the brothers challenged Indra, took away his rights and privileges enjoyed in yajnas, sacrifices, displaced him from his position as king of the gods, established their rule everywhere, enjoying the rights and positions of the Devas.

The gods assembled and remembering the promise of the Devi to come to their help when needed, went to the Himalayas and offered their prayers to Her in their distress, invoking Her presence and help.

The Mother was moved. She made Her appearance before them in a very attractive form, at once luminous, charming and graceful.

The Asuras were there, the leaders, messengers and the party of the demons king Shumbha; they were infatuated by the melting beauty of Her form and made overtures to Her to become the spouse of their king. Many generals were sent for the purpose, but no one returned with his life. Among the most important generals that were playfully done away with the Mother, Dhoomralochana was the first. Next came the turn of Chanda and Munda, two generals who met their fate at the hands of the laughing Mother who is therefore called Chamunda. Then came to the field Raktabija who was so called because every drop of his blood touching the ground would produce an Asura, a fighter equal to him. But without allowing a drop of blood to fall on earth, the Mother finished with him.

Then last came in person Shumbha and Nishumbha who attacked the Devi in vain, and were struck down by Her.

It is to be noted that Her encounter with Shumbha was preceded by the destruction of his brother Nishumbha, who embraced the fate of millions of the Asura forces that were all dealt with by the ‘Little Mothers’, matrikas, who were emanations and vibhutis of the great Mother who at last called back and gathered all these powers and Mother-Personalities into Her own Body and killed the demon-king Shumbha, taking up his challenge to fight with him single-handed. Virile and vehement in Her attacks, She is referred to as Chandi or Chandika.

The Saptashati is full of descriptions and details, and of names of weapons and of Asuras and Devi-Murtis.

When the work of the Devi was finished, the gods adored Her many manifestations and of Her motherly heart. The Goddess was pleased and once again gave Her word of assurance to stand by the side of the gods in times of need and stress, and also declared that She would ever be present in places where these hymns were read and used in prayers. Finally the Devi spoke of Her future incarnations.

This is the story of Mahasarasvati ( called Shumbhadamani ), the Goddess who presides over sattva, the balancing quality of universal Calm amidst all activity and tribulations of external nature or in the inner existence. 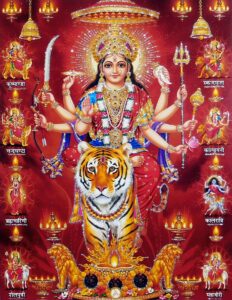 CONCLUSION OF THE DEVI-MAHATMYA

Hearing the greatness of the Divine Mother as exposed by the sage Medhas and revealed in those stories of Her three great personalities of Mahakali, Mahalakshmi and Mahasarasvati, the king and the merchant were convinced that nothing was impossible for the Supreme Goddess and decided to worship  Her and become the recipients of Her gracious blessing. Receiving instructions from the sage as to the method and secret of worship, they retired to the solitudes of the forest, and lived an austere life for three years, fully engaged in tapas using for japa, the mantras of the famous Vedic Hymn, the Devi Sukta of the Rig veda – devi suktam param japam.

At the close of the three years, Chandika, the Goddess who is the upholder of the World, Jagaddhatri, appeared before them, expressed Her pleasure to grant them their desired ends.

By the boom he got, the king regained his lost kingdom and in the next birth , he became the Savarni Manu with his unfailing regime throughout  the cycle of time named after him,  Savarni Manvantara.

At his own request Samadhi, the merchant, received from the Divine Mother that knowledge by which real detachment from worldly objects and desires is effected and the sense of ‘I’ and ‘mine’ is dissolved into the ever blissful state of consciousness of the Divine, the Supreme Truth, the Absolute.

This is the gist of Saptashati, the Devi-Mahatmya, the closing chapter of which recounts the good, worldly and other-worldly, that accrues to the benefit of those that perform the Durga Puja, especially in the beginning of sarat, the Autumn, and chant in their prayers the hymns addressed by the gods in their invocations of Chandi. 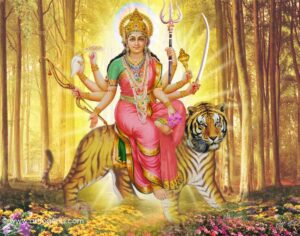